After nearly forty years and having given virtually all of his working life to O’Brien Contractors, Mick O’Brian hung up his work boots and retired at the end of December 2020.

During his 40 years within the business brothers Mick and Peter O’Brien have enjoyed a longstanding and successful business relationship, to build one of the most recognised companies in the midlands, renowned for quality, professionalism and quality performance, growing the company from a £30k turnover in the early 1980’s to £30m turnover in recent years.

During his time as a Director at O’Brien Mick has seen many changes over the years, particularly with machine technology which Mick embraced, having worked from the ground up whilst the business was growing in the early days.

Mick headed up the plant department and ours Sports Division.  Mick has always had a passion for machinery and plant and ensured that the company has always been at the forefront with new machine technology, forming a pioneering relationship with Spectra Precision in the 90’s who specialised in geospatial technology, testing and developing machine automation on Dozers at a time when Spectra Precision were the only company worldwide to develop such systems. We were the first company in Europe to trial this system, which Mick embraced and during the last twenty years, these systems have revolutionised the construction industry and particularly earthworks projects.

Mick will be missed from the business and has now gone to enjoy his well earned retirement to embrace his other passions outside of the construction industry.

“I would like to thank Mick personally for all the years together and the loyalty and honesty where we have being friends and brothers along with business colleagues”.

Having devoted over 19 years to O’Brien’s Tony Murray decided to retire from the end of December 2020.

“My first experience of working at O’Brien was as part of the audit and accounts team for Murphy Salisbury.  Everyone was friendly and it was a great place to come to. I didn’t need to think twice when Pete and Mick gave me the opportunity to join the company on a permanent basis in 2002. I shall always be grateful to them for their help and support in that time.   The last 19 years have flown by and it has been amazing to see how the company has developed in that period, the product of Pete and Mick’s vision and the hard work and dedication of everyone connected with the company.

I just wanted to say a massive thankyou to everybody for the send-off you have given me.  It just proves how lucky I have been to work here with such a great crowd of people. I’m knocked out.  I want to thank everybody at the company for being part of the last 18 years, for the laughs and for putting up with me. Thanks again and good luck for the future. I am really going to miss the people and the place.

“Tony joined O’Brien’s in 2002 when we were turning over Four million pounds annually.  At that time he was the only person in accounts. Tony has played a significant part in our growth to a Thirty five million pound turnover business.

Tony’s loyalty and wish to support us has being unquestionable throughout the whole of his 19 years with us. On behalf of myself, Mick and the other directors I would like to thank him for his support throughout the time he has been part of the team and wish him good luck in his retirement.” 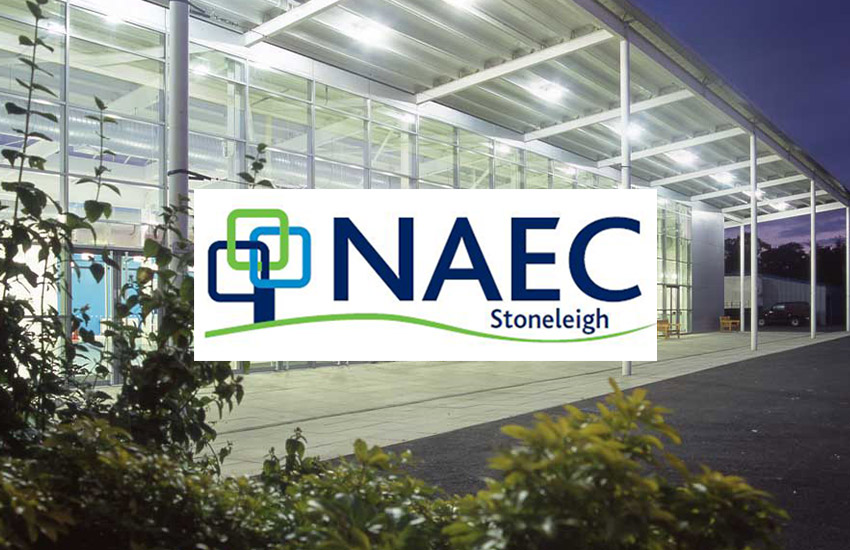 O’Brien Contractors have successfully secured a contract with the Mars Pension Trust at their event centre, Stoneleigh Park, Warwickshire.

The project delivering temporary laydown areas for future events, infrastructure, plus upgrades to the existing sewerage system are required by the park as it is being severely affected by the HS2 development. The proposed rail line splits the site into two and stagnates the northern part of the facility whilst the HS2 construction operations are being carried out.

To maintain the operating capabilities of the business, alternative areas for event space and new traffic routes are required. Also the existing drainage system is currently being infiltrated by ground water, and our works on site will include upgrades to the system to alleviate these issues.

Stoneleigh Park National Agricultural and Exhibition Centre is the location for a wide variety of popular events, including a range of exhibitions, outdoor agricultural and equestrian events, conferences and shows, attracting hundreds of thousands of visitors to the Park each year.

O’Brien will act as Principal Contractor and Designer on the project.

The project commences February with a 16 week programme. 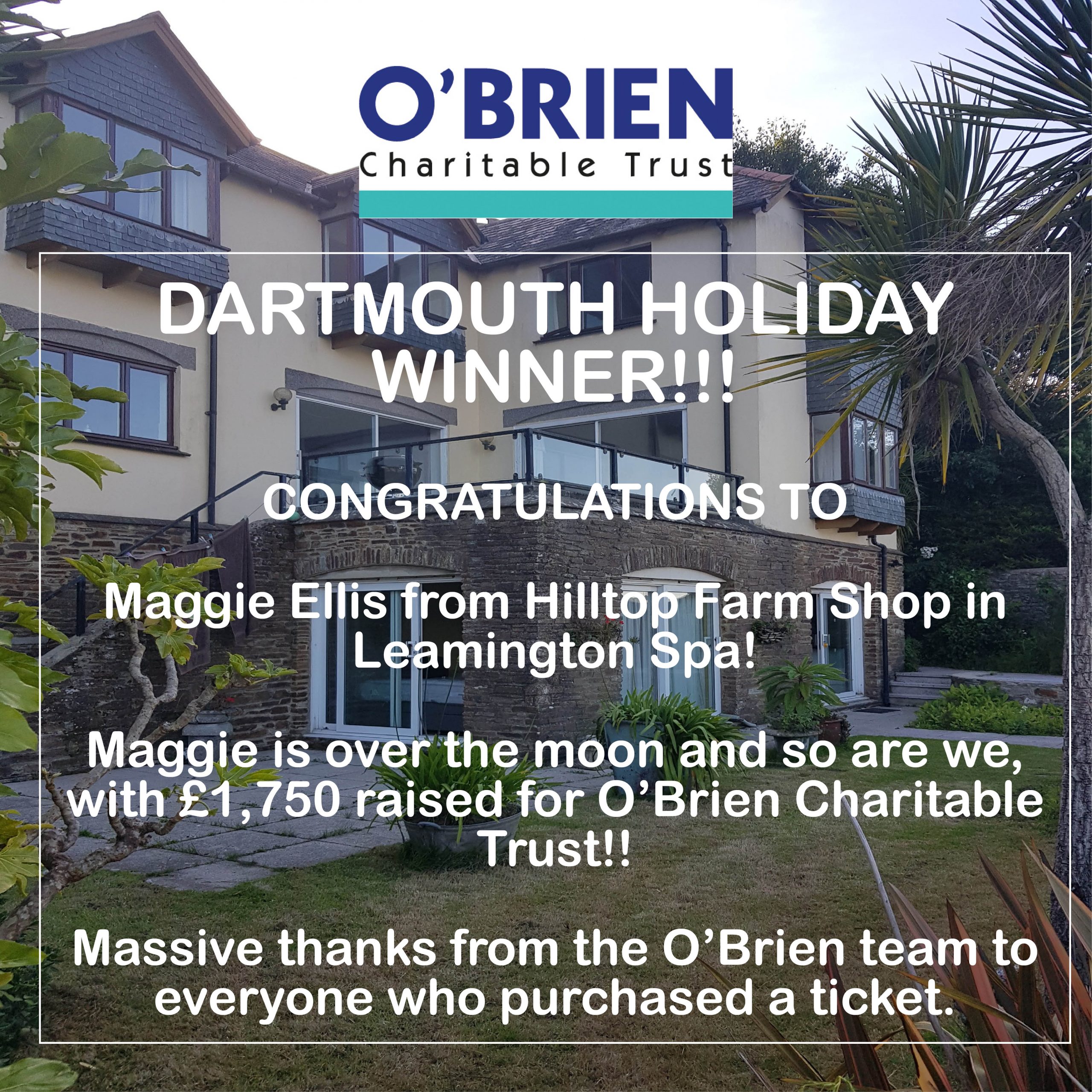 Congratulations to Maggie Ellis at Hilltop Farm Shop Leamington Spa, who is the winner of our fabulous Dartmouth Holiday!

The raffle ticket was drawn just before lunchtime on 07 December.

Maggie wins a holiday at this fabulous 4 bed holiday home right next to the wonderful Dartmouth foreshore with stunning views by day and by night and is over the moon about it!

A MASSIVE THANKS TO MAGGIE AND EVERYONE ELSE WHO PURCHASE A TICKET, WE REALLY APPRECIATE IT!

From the O’Brien Team. 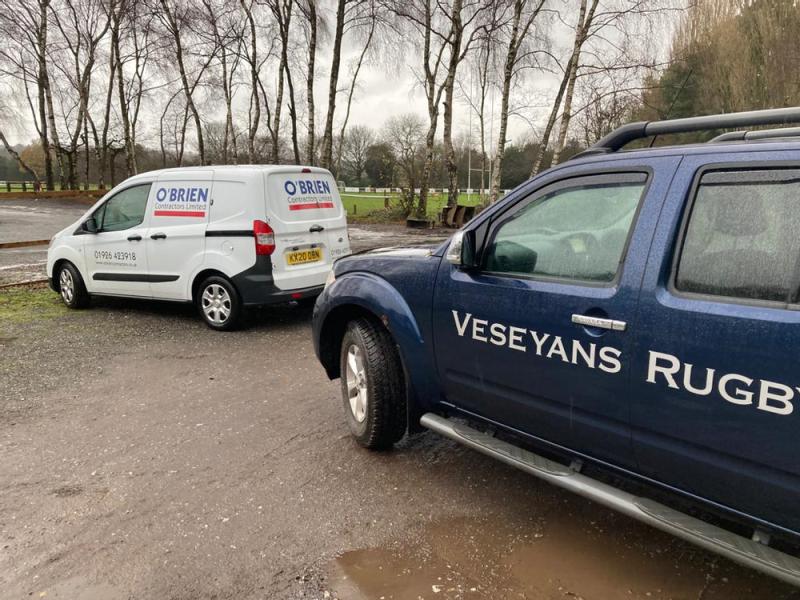 Local grass roots sports clubs play a huge part in local communities and are needed more than ever in the current circumstances. Veseyans Rugby have over 350 children at their club along with three senior teams and they have put in place stringent social distancing measures to allow training to continue, unfortunately the additional traffic and segregated parking meant that the existing roadways were inadequate.

With the help of Paul McGowan Grab Hire Ltd we are on site this week supporting the club by constructing new roads and upgrading the existing to ensure they can continue to operate and have a great start to 2021.

It might also come in handy if Santa needs an emergency landing strip next week!!

Merry Christmas and all the best for 2021.

“As we look forward to a return to rugby soon as safe and possible we are still working hard behind the scenes to keep your club in great shape for the next year.

We have always been very lucky to have some great sponsors and our friends at O’Brien Contractors are working down at the club this week extending our roadway to improve the parking facilities on busy Saturday afternoons and Sunday mornings.

Club Chairman Marc Hemingway stated, “We are massively grateful to Tony Mitchell and all at O’Briens for getting this work done for us in the current economic climate, and we are delighted to have you on board as club sponsors this season.” 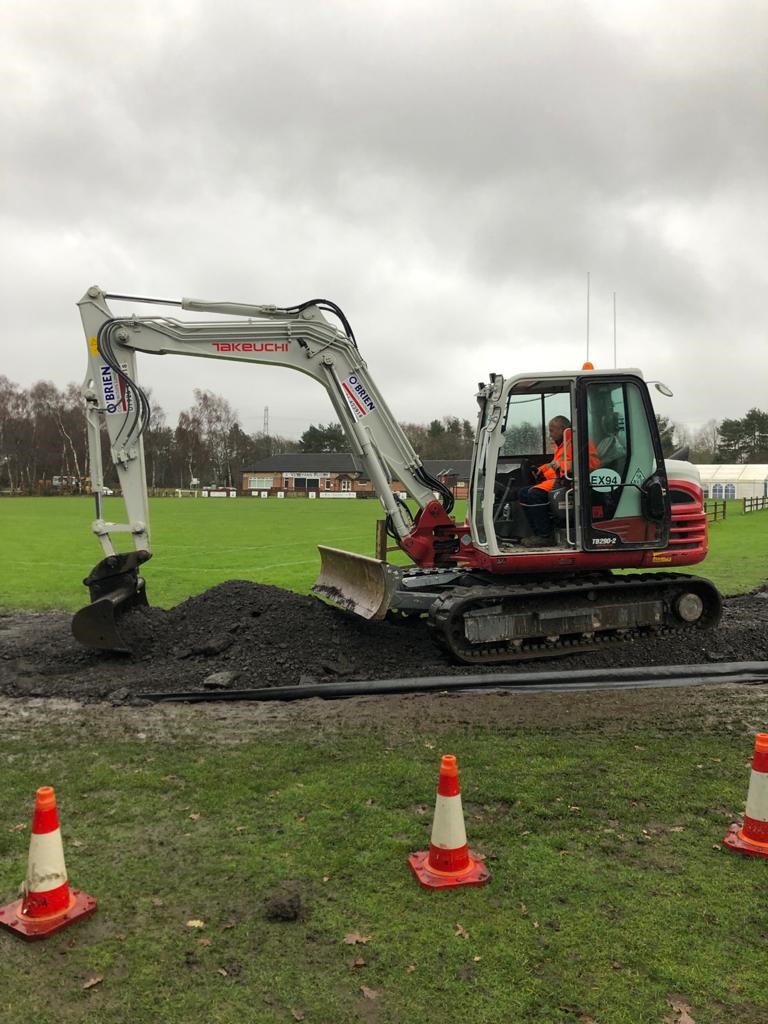 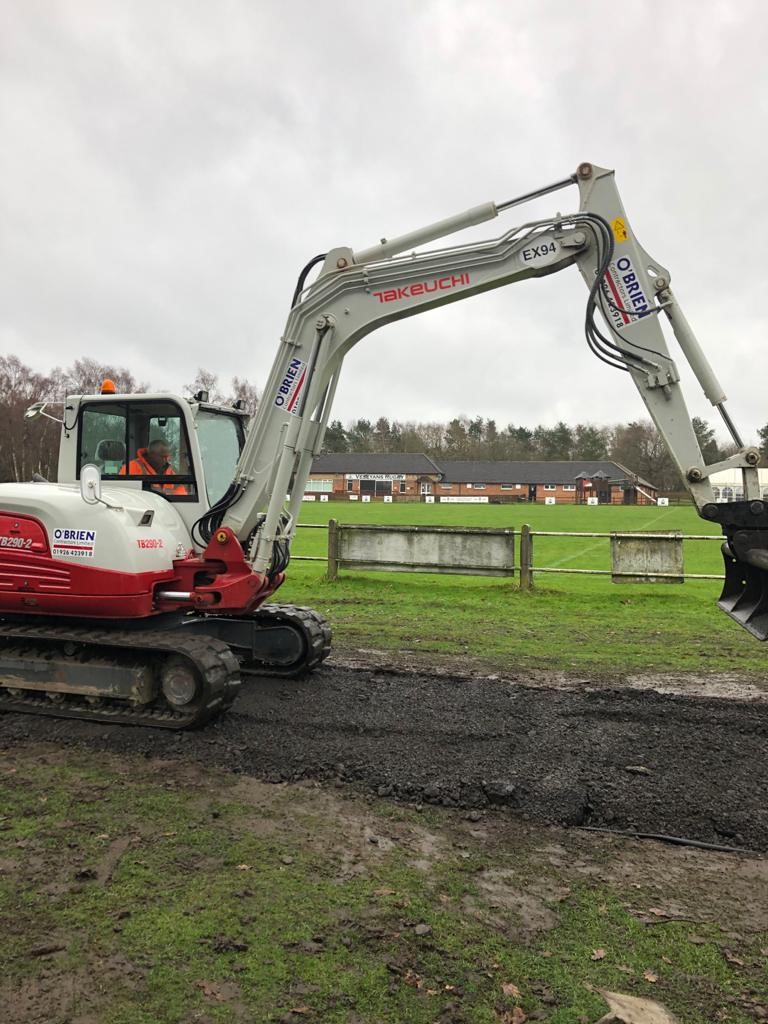 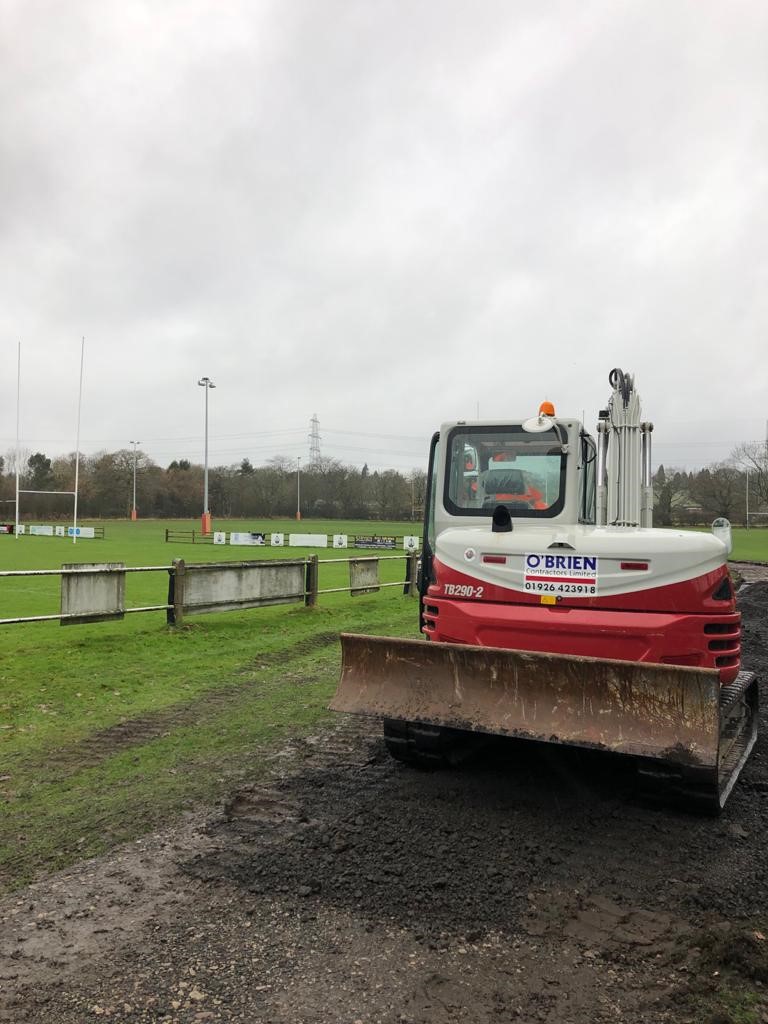 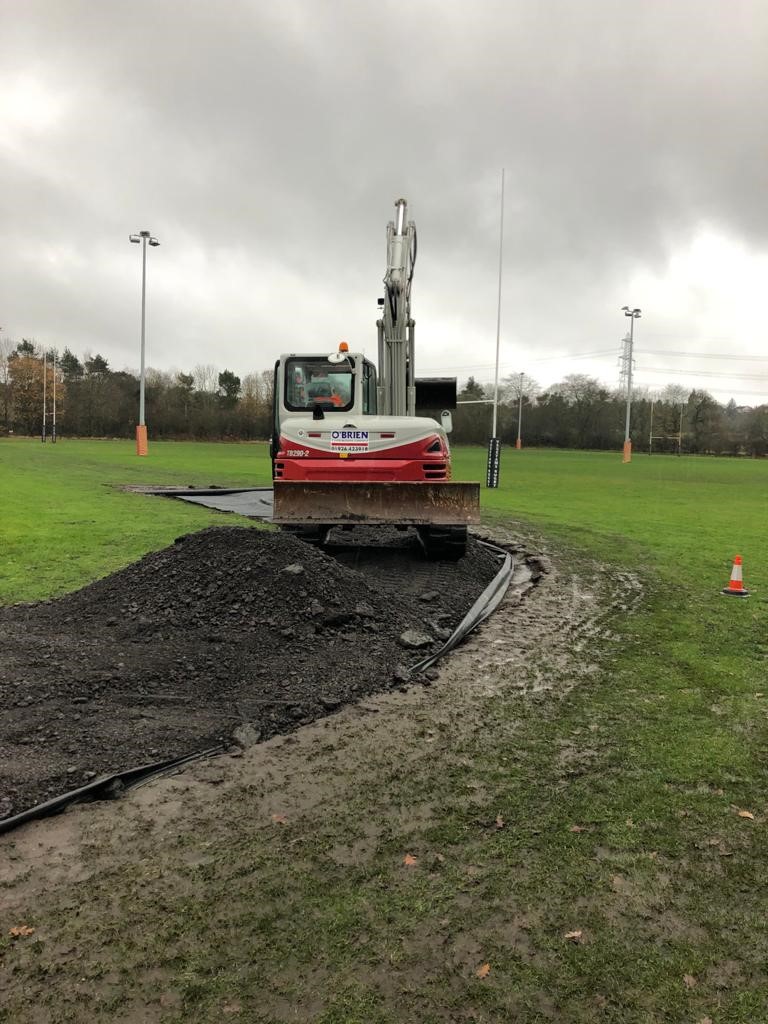 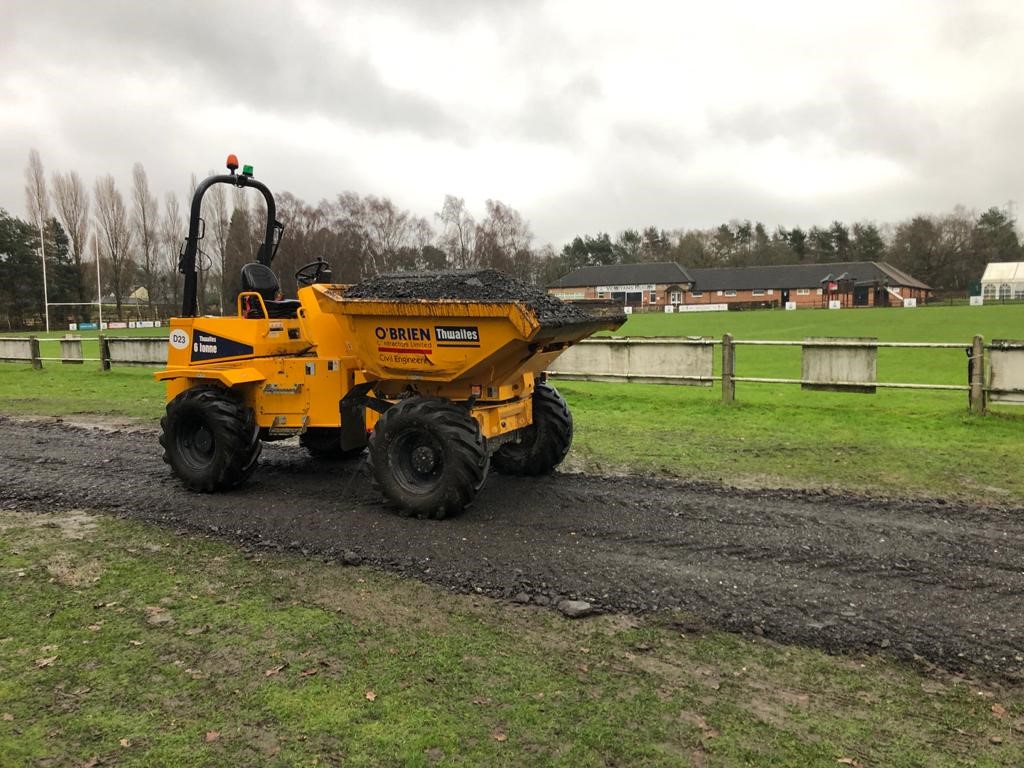 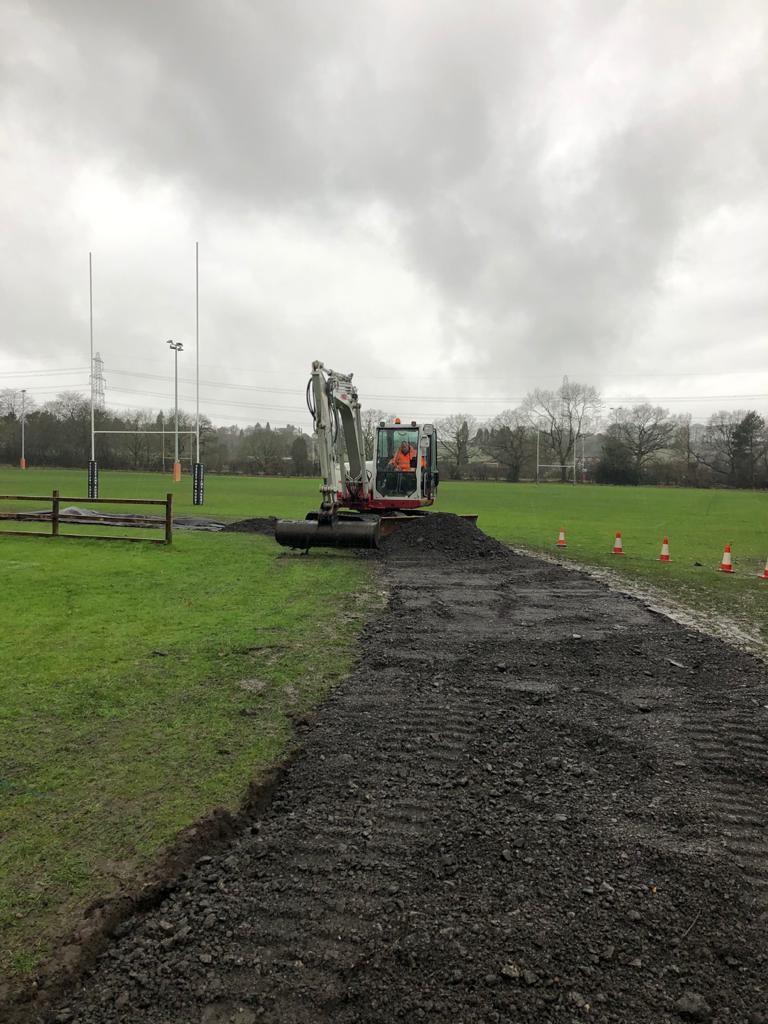 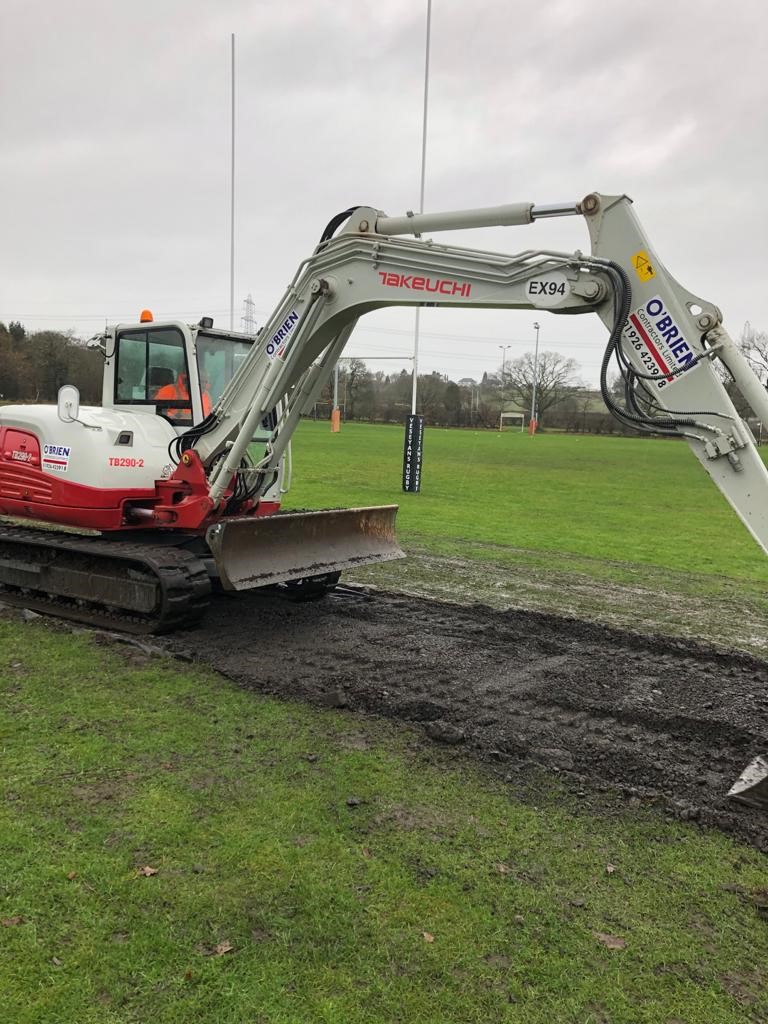